An interview with Stan on sociobiology and evolutionary psychology (see the Science in the Capital trilogy) for the bi-monthly German journal "Gen-ethischer Informationsdienst" ("Gene-ethical informations service") is available on-line -- but only in German! There are always online translators, however perfectible... The magazine covers biotechnical, agricultural and medical topics and how they relate to science, politics, research, economy and ethics.

The image is the lovely cover of the issue: cave paintings-like "primates in a supermarket" (to illustrate another article by Dr. Uwe Wendling, who also interviewed Stan).

Kim Stanley Robinson will be participating, along with a host of other people, in "Renovation", the 69th World Science Fiction Convention, taking place from Wednesday Aug 17 to Sunday Aug 21, 2011, in Reno, Nevada, USA.

In the 'Worldcon' is awarded the annual Hugo Award, among others. Candidates for the Best Novel Hugo this year are:

Reading: The Future of Cities

Our panel discusses the challenges facing urban populations around the world and how they translate into interesting story settings.

Appreciating Nature in Fiction and Non-fiction

Science fiction can often treat nature, even an intriguing alien environment, in a very sterile manner. By contrast, both fantasy and nature writing often celebrate nature and make the reader want to run outside and explore. How can writers use the language of nature writing to help bring alien countrysides to life? What are some of the good and bad examples of writing about the great outdoors in science fiction, fantasy and nature narratives?

Ursula LeGuin, one of the most important SF and fantasy authors of the last 50 years, is now in her 80s. The panel discusses and celebrates her contributions.

Just outside of Reno are some of the most beautiful mountains in the world. Kim Stanley Robinson shares some of his adventures of mountain climbing in the Sierra Nevadas.

We are seeking proposals for an edited collection tentatively titled Green Planets: Ecology and Science Fiction, with completed essays due in Summer 2012. We seek contributions that touch on any aspect of the relationship between ecological science, environmentalism, and SF, with particular attention to such topics as:

* ecological futurity and ecocriticism in SF
* visions of eco-disaster, eco-catastrophe, and eco-apocalypse
* strategies for ecotopia
* “the globe” and global thinking in SF
* science fictional critiques of global capitalism, consumerism, and ecological racism
* social justice as an ecological technology
* narratives of political resistance
* SF as it figures within current public debate about ecological science (climate change, Peak Oil, etc)
* philosophies and fantasies of Nature
* narratives of evolution, extinction, and extermination
* eco-feminist SF
* reproductive futurity
* ecology and Afrofuturism
* ecology, digitality, and techno-optimism
* terraforming and other narratives of space colonization
* aliens, alien worlds, xenobiology, and exo-ecology
* ecological thinking as a strategy for cognitive estrangement
* ecological critiques of particular unscientific or anti-ecological science fictions, or critiques of the history of the genre as a whole

We hope to produce a collection that speaks to the long history of ecological SF, ranging from the climate change that prompts the Martian invasion in War of the Worlds to Oryx and Crake, The Wind-Up Girl, Avatar, and WALL-E (and everything else before, after, and between). We likewise intend “SF” in its broadest possible sense, to include fantasy and horror literature alongside “science fiction” more narrowly construed, and hope to receive submissions that properly reflect SF as a diverse and global genre.

Please direct all queries, questions, and submissions to ecologyandsciencefiction@gmail.com. Abstracts should be around 250-300 words; submissions should also include contact information and a short bio. Please plan for final essays to range between 4000-8000 words.

Speaking of which, I just realized a significant omission! Following Stan Robinson's talk at Duke University in January 2010 (covered in KSR.info here), in September 2010 was published Polygraph #22, which included an extensive interview of Robinson by Gerry Canavan, Lisa Klarr and Ryan Vu: "Science, Justice, Science Fiction: A Conversation with Kim Stanley Robinson".

The interview is freely available on Gerry Canavan's blog (also in PDF format)! It covers a lot of ground: politicizing science, science and capitalism, social justice, democracy, Obama (the interview was conducted in the spring of 2009), the left, environmentalists, science fiction and utopia, ... At 17 dense pages, this is one of the most comprehensive and in-depth interviews of Robinson around, recommended reading -- this will will keep you busy for a bit!

How, in your view, can democracy be put to work in service of social and environmental justice and responsible governance?

This must be a whole program with reforms all across the board. Complex and messy, it would (or will) take many years in many jerks and starts. But it would begin with electing representatives who have promised to work on it, and then holding them to it in subsequent elections, for a long time, until a pattern was built and a certain trajectory or path dependency set into place. A very difficult assignment.

Videos from the Bruce Initiative on Rethinking Capitalism 2011 conference at UC Santa Cruz, April 7-9 2011 (previously announced on KSR.info here), have surfaced on their website.

Both panels covered much more than their announced topics: different forms of capitalism across states, new accounting methods, international regulation and law, post-secular societies, sociobiology, marxism, the role of the state, capitalism in China, ...

There's a lot to learn and think about here, and not only in these panels above. The reader of Robinson's works might find other panels interesting as well, such as this one by Lynn Stout, presenting results from research on psychology, behavioral economics, evolutionary biology and conscience -- things that Frank Vanderwal (from the Science in the Capital trilogy) would enjoy a lot!

More news for July! Most are somewhat stale news, as real life is taking its toll.

The Best Of Kim Stanley Robinson (Night Shade Books, 2010) has been out for a while now, and is available as hardback, paperback or e-book.

It's been getting some reviews, notably this one by Strange Horizons contributor Niall Harrison.

Few other writers can capture so vividly the sense of being-in-the-world.

[On "Remaking History" and "A Sensitive Dependence on Initial Conditions"] In Galileo's Dream, when the maestro is whisked away to the year 3,000 and given a history lesson, this is pretty much what he's shown: a great river of histories, many streams braided together to carve a limited channel through possibility space. Whether or not this is a sustainable model for understanding history, it strikes me that it's a fascinating way of understanding science fiction's versions of history—indeed, as John Clute argued in setting out the concept of "First SF", the existence of an early default narrative for the genre, it was the compelling understanding of the field as late as the early 1990s. Since then, we are meant to understand that there is no consensus history of the future in the way that the Moon-Mars-Stars progression provided a backdrop for the Golden Age. And yet the version of our future that Galileo is shown passes through a wrecked world, a rebuilding with an increased understanding of environmental stewardship, a slow exploration of the solar system. It's impressive, when you stop to look at it, how much contemporary SF falls somewhere on this timeline—Paolo Bacigalupi's The Windup Girl (2009) at its nearest end, Paul McAuley's The Quiet War (2008) at the other, Ken MacLeod's Fall Revolution quartet (1995-1999) covering the whole spread. As a template narrative, its only real contemporary competition is the Singularity.

By the way, Strange Horizons previously had a fun little debate starting from a quote from an interview with Robinson. The subject was infodumps in science fiction novels... well, actually, infodumps in Robinson's novels!

The cover art for The Best Of was actually not made for the book specifically. Its title is actually "Goodnight Tale" and it was made in 2009 by Joe Jesus. It is available on his deviantART site for download in high quality! 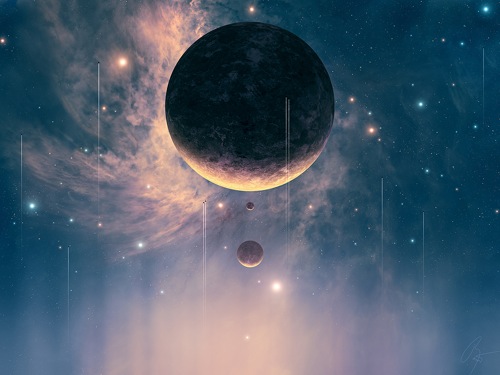 The short story "The Lunatics", recently reprinted in the collection "Brave New Worlds" (Night Shade Books, 2011), is available online for free from Tor.com, as part of their "Dystopia Week".

Good news for our French friends: the translated Science in the Capital trilogy now has new paperback editions! French is the language Robinson has been the most translated into (as far as I know). 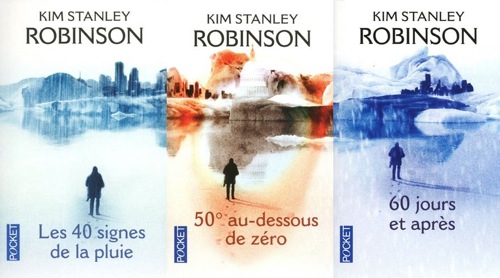 Alyssa Rosenberg from ThinkProgress has been writing for and animating a Book Club discussion on Red Mars since last month, and there has been some good discussion in there. There have been 5 parts so far, with the upcoming sixth that will wrap the book up: 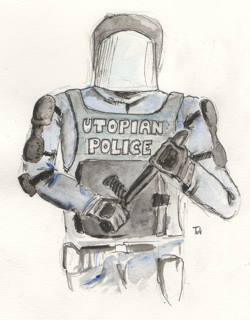 Thanks to Google alerts, it's sometimes fun to track down all mentions of Kim Stanley Robinson in articles that are published on the internet. For example:

This tale of the colonization of Mars begins in 2026 and ends two hundred years later, with the terraforming of Mars largely completed and humanity making its first steps into interstellar space. Packed with detailed descriptions of the colonist's everyday lives, and a close attention to the geography of Mars, it's as close as any of us will get to walking on the red planet. (If, sometime after reading this, you become an actual explorer of Mars, feel free to look me up and berate me for my lack of faith in you. It'll be something to tell the other people at the old folks home.)

Rest assured, there is more coming!