Awake To Emptiness is Book 1 of the novel The Years Of Rice And Salt.

Bold, a Mongol warrior in the service of the Khan Temur-i-Lang (Tamerlane) is part of a great campaign to conquer Magyar (Hungary). Upon arrival, he soon finds out that every single Magyar has died from a plague and that the cities are deserted. Atop of that, a great storm kills Temur.

Bold flees and wanders until he is captured by slave traders who bring him to Alexandria. There, he is sold to an Arab, who in turn sells him to the Chinese in Mombasa. The eunuch Admiral Zheng He in charge of a huge fleet travel along the eastern African coast, on to Lanka (Sri Lanka) and reach Hangzou. During the voyage Bold takes care of a young African boy, Kyu, who was castrated by the Chinese. The silent Kyu grows a great hate against the Chinese and plans his revenge.

In China, Bold and Kyu work in a restaurant owned by Shen and his wife I-Li. Kyu ends up burning the place before taking Bold with him to Nanjing and then to the new capital, Beijing, where Kyu plans to kill the emperor Zhu Di (The Yongle Emperor). Bold and Kyu enlist their services to the Imperial family and Kyu, as a eunuch, gathers power throughout the years. When Zhu Di dies in a campaign against Tartars and Zhu Gaozhi takes the throne, Kyu rebels. However, he and his entourage, Bold included, are killed.

3 Monkey and Tripitaka : Monkey, or Sun Wu-Kong (see p. 11 note), is the hero of the Journey to the West (西遊記). Sent on the journey with priest Xuanzang 三蔵 ("Tripitaka" in Sanskrit, meaning "three baskets" as in Chinese) as punishment by the Buddha, safely brings Buddhist scriptures back to China from India.

3 Temur : Tamerlane in English literature, corrupted from Temur-i-Leng; 鐵木兒 in Chinese approximation; the first character provides the "iron" mentioned in the story; was a legendary conqueror whose campaigns led him throughout the Middle East, India, and Mongolia. In real history, he died of a fever in 1405 at the age of 69, while on the way to an attempt at conquering China. In this story, a coin flip send him and his army eastward instead of westward.

10 Moravian Gate : (In Czech, Moravska brana) The valley in eastern Moravia, which is itself in the eastern part of the modern Czech Republic. It contains the Bečva and Odra rivers and serves as a border between the Czech Republic and Slovakia.

20 "three smaller temples flanked a large one" : This is probably the Parthenon in Athens.

27 Mamluks : Also "Mamelukes". Slave soldiers for the Abbasid caliphs, who eventually rose to their own positions of power. By the 14th century, Mamluks were ruling Egypt, and maintained their hold until Muhammad Ali Pasha's ambush revolt in 1811.

28 Zanj : A generic word for East African black slaves of the Abbasid caliphate in Basra.

33 Zheng He : 鄭和 in Chinese (1371-1435). Zhenghe.jpgIn this incarnation, jati member "Z" is the historical person Zheng He, Chinese mariner, explorer and fleet admiral. Made many voyages to various parts of the world in the early 15th century in his immense fleet under the sponsorship of the Yongle Emperor. His family was Muslim, thus KSR's comment that he was a western "hui". This story , with . The expedition depicted in the novel seems to merge several of his voyages: the 4th voyage (1413 - 1415), the 5th voyage (1416 - 1419), both of which stopped at Mogadishu and Calicut, and the 3rd voyage (1407-1409), which involved rival kings of Java. 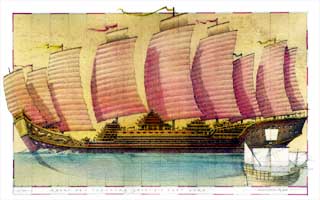 33 Hui : One of China's many ethnic minorities, the Hui practice Islam and have historically been the victims of discrimination, but not so in, say, Zheng He's case. The word can also be used for Chinese Muslims in general. The Chinese character for hui is 回, which usually means a round or instance or time or rotation with a number before it, and is also used for innings in baseball. I don't know why it's used for these people; it may have been chosen for its phonetic value. According to the 1990 census, there are approximately 8.6 million Hui in China.

35 the Yongle Emperor : 永樂 or 永楽 in simplified characters; his personal name Zhu Di is 朱棣. The third emperor in the Ming dynasty (ruled 1403-1424). He attempted to have his nephew, the previous Jiangwen 健文 emperor, killed (supposedly in a palace fire, though Jiangwen may have survived to live in obscurity as a recluse), and stole the throne. The sponsor of Zheng He's treasure fleets, he did indeed move the capital from Nanjing north to Beijing.

38 Dalada : The sacred tooth of Buddha. In our world, this is enshrined in the Temple of the Tooth, known as the Dalada Maligawa, located in the city of Kandy in Sri Lanka.

39 Japanese wakou : 倭寇 Pirates in the Sea of Japan who avoided rules against shipbuilding and overseas voyages by conducting raids from small boats.

48 the Four Emperors : Sanskrit catur-mahārāja; Chinese 四天王. Indra's four deva guardians who protect the world from the asuras. They are: East Dhrtarsastra (in Chinese and Japanese, 持國天), South Virūdhaka 增長天, West Virūpāksa 廣目天, and North 多聞天 Vaiśravana, bearing the colors white, blue, red, and yellow respectively. You can see a statue of them at the Horyuji 法隆寺 in Nara, Japan, which is the world's oldest wooden building, dating from 607.

48 Twenty-Eight Constellations : 二十八宿 Marking off the fixed stars, these 28 are split into four groups of seven, each associated with one of the animals that guard the four directions: the Blue Dragon, the White Tiger, the Red Phoenix and the Black Warrior. (Note that these are different from the Four Emperors.)

48 The Twelve Horary Branches : This is the familiar Chinese zodiac (生肖 shengxiao; in Japanese 干支 eto or 十二支 jūni-shi). In order, the animals are the rat, ox, tiger, rabbit, dragon, snake, horse, sheep, monkey, rooster, dog, and pig. There are special characters used for the signs which are different from the ones used when talking about the animals. The year 2004 is the monkey.

66 Beijing : 北京 Běijīng; the new capital of China whose construction was begun by the Yongle emperor in 1406. I'm not too sure, but supposedly the modern pronunciation Běijīng came about in the Qing dynasty (17th to 19th centuries, roughly), and that in the 1400s, the historical pronunciation of Peking might be more accurate.

77 Chao Kao : 趙高 (Zhao Gao in pinyin; died c. 207 BC) The chief eunuch of the first Chin (Qin) dynasty emperor. When the emperor died suddenly, Chao concealed his death and made up a fake imperial decree ordering a rival official to commit suicide; he followed this by killing several other officials. Eventually the heir of one of the people he killed retaliated, killing Chao and ending the Qin dynasty.

78 the Hongxi Emperor : 洪熙 (1378-1425). He succeeded the Yongle Emperor and did indeed end the voyages of fleets such as Zheng He's. Born in 1378, he was not a young man at all when he took the throne, so either KSR has changed Chinese history significantly in having the Yongle die sooner, or he's taking artistic license in describing the Yongle's struggles to get his son to appreciate his position. Died in 1425, just one year after becoming emperor.

85 "We were a village, that time in Tibet" : A reference to a previous incarnation; this life of the jati will be mentioned several more times in the story as future incarnations recall it, allowing the reader to piece together the story of their deaths.

(p.36-37: Calicutans wonder at the size of the Chinese fleet)