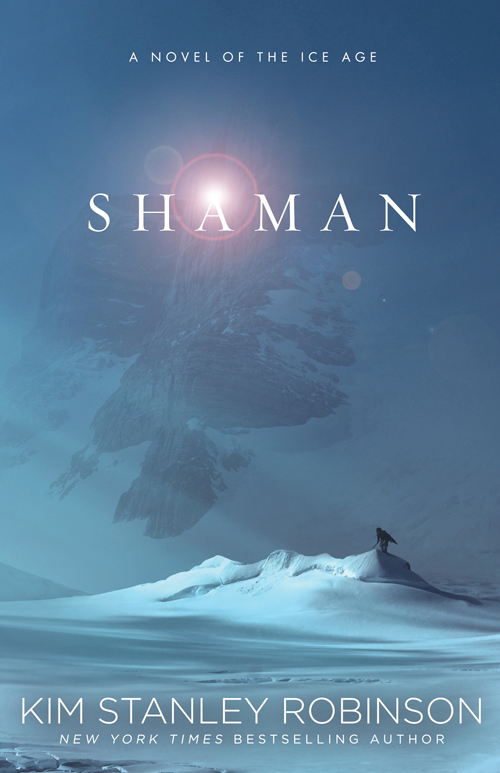 Shaman is the title for the novel by Kim Stanley Robinson published by Orbit in September 2013. 456 pages.

It describes the life of humans living close to the Chauvet cave in Vallon-Pont d'Arc, about 30,000 years ago, during the Ice Age.

Kim Stanley Robinson, the New York Times bestselling author of science fiction masterworks such as the Mars trilogy and 2312, has, on many occasions, imagined our future. Now, in SHAMAN, he brings our past to life as never before.

There is Thorn, a shaman himself. He lives to pass down his wisdom and his stories -- to teach those who would follow in his footsteps.

There is Heather, the healer who, in many ways, holds the clan together.

There is Elga, an outsider and the bringer of change.

And then there is Loon, the next shaman, who is determined to find his own path. But in a world so treacherous, that journey is never simple -- and where it may lead is never certain.

At around the Spring solstice, Loon's wander: left naked, he has to survive for 13 days in nature, alone, and tell the tale to his people. Loon is twelve.

The Wolves at Home

Daily life at Loon's group of people, the Wolf pack, close to the Urdecha river. Learning things with their shaman Thorn, painting, the songs. Helping the women making things while recovering from his wounded leg. Then hunting elg. Starving through the spring. Finally, ducks arrive: summer!

Summer trek north-north-west, to caribou hunting ground. Then to the festival: 8th day after the new moon of the 8th month! Dancing, games, stories, finally sex. Loon meets Elga from the Eagle pack; they decide to marry and she joins them on their trek back.

Loon and Elga's wedding. At the eleventh full moon, annual gathering in the cave; Thorn paints lions and bisons (and they leave hand marks). Elga adapting. Hunting, meeting travelers. Elga pregnant, gives birth to a boy. A difficult spring, so much that a member of the pack dies. Finally, summer.

At the eight-eight festival, Elga is abducted. Loon leaves with Pipiloette to find her. Loon is captured by the northeners, the jende, and passes the winter with them, separate from Elga. The jende have captive people that they don't consider as people, and captive wolves; they live in large heated huts; they store frozen meat, carry fish from the salt sea, gather firewood; they have better snowshoes than the Wolf pack. Loon and a group survived being trapped on an iceberg floating in the sea; trekked on the ice plateau. Meanwhile, Thorn takes the old one Click with him to try to take Loon and Elga back. In late spring, Thorn and Click reach the jende and with Elga they escape.

They manically try to escape the ice men and their wolves, trekking fast and for days. Loon's bad leg is so worn he has to walk with poles. They finally lose them after a storm, they cross a river with ice with difficulty, they nearly starve, while it is still snowing. Click dies, and they have to eat him to survive, and use his frozen body as a sled (Loon later has a vision of Click's spirit saying goodbye). And they finally reach home, exhausted.

All the Worlds Meet

Resting, recovering. Thorn is tormented by Click's ghost. They miss the eight-eight festival. Loon makes better snowshoes to give to the northeners as compensation for Elga. Next spring, they give Click a proper burial. In the festival, the Wolf pack and the northereners settle their dispute, arbitrated by corroborators. Elga gives birth to a baby girl. The pack is torn with disagreements and also because it is getting too large; discussions of splitting into two packs. Thorn falls ill for a long time and eventually dies.

Soon after Thorn's death, Loon goes deep into the cave and paints, a group of horses, to his great satisfaction; his fire goes out and he has to find his way out in complete darkness (using a bear skull in the process). The pack separates in two, with Loon serving as both groups' shaman. Loon has a final vision of Thorn; Loon starts teaching his son Lucky in the ways of the shaman.

Thorn: the pack's shaman. He was taught by Pika, the "bad shaman".

Heather: the pack's head woman. Was Pika's model for the woman in the cave mating with a bison.

Elga: from a pack northeast, was taken into another pack, then met Loon and joined the Wolf pack.

Pippiloette: traveler from the Lion pack, travelled across the world as far as he could.

The ice people: Kaktak, Elhu, Orn; Bron is another captive with Loon.

Click: an old one, a Neanderthal. Wounded, he is taken care of by Heather. Joined Thorn in his expedition to save Loon and Elga.

Third wind: comes to you when you have nothing left, to go on. The narrator.

Urdecha: main setting. The river Ardèche. Loop Meadow, Loop Hill, the Stone Bison are all recognizable features of the Vallon-Pont d'Arc part of the Ardèche, where the Chauvet cave is situated.

Five Rivers: just north of the site of the eight-eight festival, where several creeks meet the Lir, with the river Maya north. Possibly modern-day Angers, where the Loire is met by several rivers, including Mayenne.

White cliffs: the jende live north of some white cliffs, north of which there is an ice plateau. England and the Cliffs of Dover?

At the time Shaman took place, knowledge and history was orally transmitted, and songs and stories repeated again and again were very important. We read about the process of passing down information from one generation of humans to the next with the relationship of Thorn and Loon. Thorn corrects Loon about ill-remembered verses but at times Loon prefers his own version: that too is part of the process, and the songs, like memory, are a living changing thing. There are several instances where the songs are repeated in the text, and the reader has the benefit to leaf through the pages and read the earlier version and spot the differences. Stories and accounts of deeds are told in verse, like lays, helping in memorizing them. Remember! Remember! Robinson's songs in Shaman are also myths and reflect the beliefs of that time; some can be connected to later ancient myths, versions of which have survived until today.

Here are the songs and stories in Shaman, in order of appearance in the text:

"I'm finishing a novel set in the ice age, about the people who made the paintings in the Chauvet-Pont-d'Arc Cave in southern France, about 32,000 years ago," he said. "I do a lot of snow camping in the Sierra, and I put my snow knowledge into it and tried to explain how we became who we are now. It's only science and archaeology that allow us to write historical fiction with any accuracy," Robinson added. "So it's kind of science fiction in a way."

On KSR.info, articles with KSR interviews and reviews: