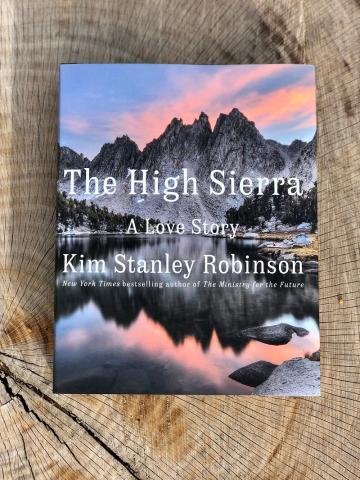 It's The High Sierra: A Love Story.

Robinson described it in this way, in an interview for Publishers Weekly:

I hope that the book can inspire people to pay attention to simply being outdoors, the sky, the trees, walking—things that can be done anywhere. Some parts of the Sierra experience are very specific to the Sierras. Others are specific to simply being outdoors. I hope that people reading the book who will never get to the High Sierra will be thinking, “Well, that sounds like a good range. I wonder about my local hill—it’s got rocks, it’s got trees, it’s got sky and clouds, weather.” I hope it inspires them to find pleasure in outdoorness and the physical world, especially in this age of the internet and younger generations that are very often caught in their screen reality, to get out into that third dimension.

In another interview for Sactown Magazine, Robinson discussed the new book, but also Mars and Ministry:

But ordinary suburban neighborhoods could begin to think about less grass, less water, more native species and more wildlife corridors. There are things you can do as local landowners and as local citizens that begin to add up pretty quickly to a larger vision of the landscape.

The Los Angeles Times include it in their May 2022 books and Esquire already recommends it as one of the Best Books of Spring 2022.

In other KSR news:

KSR recently visited India to meet the Dalai Lama (!), in a Dialogue For Our Future event on Earth Day, during which time the Dalai Lama was given a symbolic bloc of melting Himalayan ice (report).

Kim Stanley Robinson, who described himself as a science fiction writer, asked how Buddhism can help science. His Holiness told him that scientists have been interested to discuss ways to achieve peace of mind because they recognise that if the mind is disturbed people won’t be happy. He emphasised the benefits of discovering more about mental consciousness and learning to train it on the basis of reasoning.

KSR also delivered the closing keynote for that, on Creating a Good Anthropocene (available on YouTube).

KSR's March column for Bloomberg Green was a Guide to Keeping the Doomsday Glacier Hanging On: "Send the navy—all of them—and the oil industry to Antarctica if we want save every beach on the planet"

KSR wrote the introduction to The Dark Ride: The Best Short Fiction of John Kessel.

In the newly published book/reader version of (re)programming – Strategies for Self-Renewal, Marta Peirano is in conversation with, among others, KSR.

A very interesting discussion with KSR on buddhism, meditation and more on A Skeptic's Path to Enlightnment.

An interview with KSR by Andrew Majeske published as an article on the New American Studies Journal: Climate Crisis and Writing in the Anthropocene.

KSR spoke to the podcast of the World Bank's International Finance Corporation: the Ministry of the Speculative Carbon Market.

Erzähler des Klimawandels ("narrator of climate change"), edited by author Fritz Heidorn, edited by Hirnkost, is a new KSR short stories collection has been published in Germany, together with interviews, discussions and guest contributions from Klimahaus Bremerhaven. With material from the 1970s to today, it is the first time these ten short stories appear translated in German. Review by Die Zukunft.

The paperback of Ministry found its way to the top sellers list of SF&F books!

More recommendations of The Ministry for the Future:

Stay tuned as the interviews and reviews around the new book start coming through.