The Alchemist is Book 4 of the novel The Years Of Rice And Salt.

Khalid al-Samarqandi, having attempted to deceive Sayyed Abdul Aziz Khan into thinking he could convert lead into gold through alchemy, has his right hand cut off in punishment. With the help of his son-in-law Bahram working in their water-powered metalwork compound and of Tibetan scientist Iwang, they come to disprove alchemy altogether and exceed the knowledge established by Aristotle. Together, they go on to try to understand how the world works in a multitude of fields.

Bahram, the most religious-inclined, tries to keep love at the center of his happy family and of their actions. Khalid rejects all of that and fights to prove himself to the world and to God. Iwang has his own personal concept of religion, perhaps monotheist too, and Bahram realizes the Hindus too could be monotheists. Iwang develops an interest in Islamism but, to Bahram's relief, does not convert.

Their theoretical explorations are dismissed by the Khan and his councilor Nadir Divanbegi, who, with the looming threat of a Chinese invasion, asks for immediate military results. With the Khan's power waning and with Nadir continuously placing his hopes in Khalid and Iwang, Nadir gathers more enemies in the court.

When the Chinese -- the new Qing dynasty -- finally attack, a plague also strikes. Khalid, Iwang and Bahram lock themselves in their compound. The plague appears inside the compound and they do not know whether it was given purposefully to them by Nadir to get rid of them, or whether it is a punishment from God. The disease spreads and ends up killing them all one by one.

239 Bahram : Bahram is Persian for "Mars" and is likely a reference to the Mars trilogy.

240 Al-Razi : Abu Bekr Mohammed ibn Zakhariya ar-Razi (c. 850-932), called "Rhazes" in Latin. Another major scholar of medicine in the Islamic world who continued the work of the ancient Greeks. As did ibn Sina, he wrote a huge number of texts on medicine, philosophy, and science in general.

240 Sayyed Abdul Aziz and Nadir Divanbegi : They really did exist in Bukhara around this time, though the story seems to begin in 1641 and end in 1644, and Abdul Aziz Khan seems to have been at the height of his power somewhat after this. I've no idea if he really had the temperament given to him here.

241 Jildaki : Aidamir al-Jildaki (?-1342). Another writer on alchemy. In his commentary End of the Search, he discusses Qasdim, Khalid, Jabir, and Razi.

241 Jabir : The father of modern chemistry. Lived in the late 8th century AD. Occasionally known by his Latinized name of Geber, his rational investigations transformed alchemy into the modern science of chemistry. His Kitab al-Kimya "Book of Chemistry", in particular, was translated into Latin and used frequently in Europe in later centuries.

241 "The Secret of Secrets" : One of the most famous of Razi's books. This one discusses alchemy and chemistry.

251 Mary the Jewess : Said to be the founder of Greek alchemy; lived in the third century AD.

267 two thousand li an hour : Modern science measures the speed of sound in air to be 330 m/s; their measurement, given that an ancient Chinese li 里 is 576 meters, would work out to 320 m/s. For reference, modern China has standardized a li at exactly 500 meters, or half a kilometer, and a Japanese li (or "ri" 里) is about 3900 meters.

278 Sher Dor madressa : Located in the Registan, in Samarkand. It, along with the Ulug Bek observatory and Tilla Kari mosque, are three of the area's most famous buildings. Ulugh Beg, the grandson of Temur (see note on p. 1), had an observatory built there in the mid-15th century AD, where many astronomical calculations were made, including the most accurate measurement of the solar year, until Copernicus improved on it a century later. 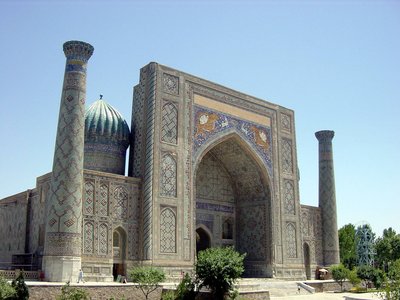 284 Zosimos : Zosimos of Panopolis lived in Egypt around the 3rd century AD, writing about alchemy as well as physics. It may have been printed two years before Khalid reads it, but the original is much older.

284 "Sum of Perfection" : Another work by Jabir; this one was translated in our world by Richard Russel of England in 1678.

284 Apollonius : Said to have discovered the Emerald Tablet in a cave in Tyana around the time of Christ, though Khalid's explanation may be as right as any other. Hermes the Thrice-Great, or Hermes Trimestigus, is supposedly a descendant of the Egyptian god Thoth. More here.

285 Bartholomew the Englishman, "On the Properties of Things" : In Latin, "Liber de proprietatibus rerum"; written around 1230-1240 in nineteen volumes (presumably Bahram is buying a summary of some kind). The story on page 287 is taken directly from the book (Book XVI, chapter 16: "On Glass" (De vitro). Bartholomew (Bartholomaeus Anglicus in Latin) was a Franciscan monk.

285 "Epistle of the Sun to the Crescent Moon" : An alchemical poem by Mohammed ibn Umail. In Arabic, Risalat as-gams ild l-hilal.

300 two lis of air : Using the traditional Chinese distance, this would be about 1152 meters.

300 "or gold!" : The khan's exclamation sounds somewhat foolish when one realizes that, lead, with an atomic mass of 206, is quite a bit heavier than gold.

303 Jundi-Shapur : Could refer to an academy founded in AD 555 by Nestorians who translated Greek works on medicine.

306 Sogdian kings : The province of Sogdiana, corresponding to modern Bukhara and Samarqand, was conquered by Alexander the Great during his excursions east of Persia after 330 BC.

312 Jupiter's four moons : The four discovered during the Italian renaissance by Galileo (beginning in 1610) are are Io, Europa, Ganymede and Callisto, which surely correspond to the ones Khalid and company saw. Khalid names them for the Khan's wives, and similarly in our world, when Domenico Cassini discovered four moons of Saturn (Tethys, Dione, Rhea and Iapetus), he honored king Louis XIV by calling them Lodicea Sidera ("the stars of Louis" in Latin).

317 subtle mathematician : In our world, this is a famous quote from Albert Einstein.

318 rakshi : An alcoholic drink made from millet. Originates in Nepal.

321 wan-jen-ti, the killer of myriads : The first two Chinese characters would presumably be 萬 (myriad) and 人 (person). I can't guess the third one.

329 "Same above, same below" : This seems to be in the above-mentioned Emerald Tablet. See Robertino Solarion's translation here.

329 "Multiply the two masses attracting each other" : This is the gravity equation in every physics textbook, GM1M2/r2.

332 7th century plagues : It's unclear whether these are the first plagues that struck Europe from about 1347-51 (in real history as well as in the novel), or the mutated, more deadly plague which KSR posits for his story, which strikes around 1380 or 1400. Both of these dates lie firmly in the 8th century AH, not the seventh.

344 Dar-al-Islam : "The House of Islam"; refers to the collected Islamic states.