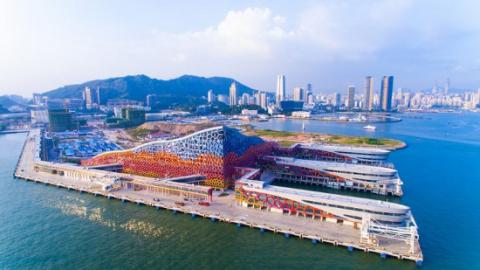 Are you reading RED MOON over the Christmas break? Or during the Chinese New Year? It must be one of the two, East and West looking at each other, progressively realizing they are not that different. Meanwhile, China has launched a probe, Chang'e 4, to explore The Dark Side of the Moon, and it should be landing in the first days of January 2019 -- in a spot close to the location of Fang Fei's refuge in Red Moon!

Here are some Red Moon excerpts to whet your appetite: Orbit has the first chapters with Fred's landing on the moon (also on Facebook), Syfy has Ta Shu's first impressions of the moon, Hachette also introduces the Analyst and the quantum computer Little Eyeball, and at The Verge Ta Shu goes on a moonwalk with an Earthrise! You can also listen to Fed's moon landing in this clip from the audio book version.

KSR has wanted to write a China-themed novel ever since doing all that research to write The Years of Rice and Salt. Says Robinson (from Syfy):

"I really loved reading Chinese history, Chinese literature. I had never been there but I wanted to write about it again, and what I didn't realize was writing about China in the present and the near future was vastly harder than writing about it in the past."

"It's different from when people ask me, because of my Mars Trilogy, if I'd go to Mars, and I always say no," he revealed. "Because you're talking about five years away from Earth stuck in little rooms and it's not my thing. Now the moon is different! You get there in three days, you spend a while bouncing around looking at Earth and tripping on the strangeness of it and come back home."

He expands in an interview for Space.com:

I went to China myself, because I'd never been there before. It was a very limited visit, or two visits actually. I saw only three cities. I saw Hong Kong, Beijing and a coastal city called Xicao. That at least gave me some personal information and some visual and sensory impressions of what I was writing about.

Truthfully, I don't think [Moon colonization] will change or shape humanity very much at all. I think it will end up being a whole lot like Antarctica.

I think the main thing I want [readers] to take away from my book "Red Moon" is that China is really interesting and important and nobody understands it — and I mean not just Americans, who definitely don't understand it, but even the Chinese people themselves.

It's a big, powerful society in rapid flux. It's unstable and dynamic and it's super interesting.

As he did with 2312, KSR presents his new novel in this nice little video with infographics from Orbit (which gives us little drawings of the protagonists!):

[About cyberpunk vs other science fiction] “I’m gonna blow them away with infodumps. If it’s interesting, it’s fucking interesting.”

Robinson respects the newest generation of sci-fi writers for being “forensic in taking apart capitalism,” he says, but thinks that for stories to stick—to make their way into the hands of congressional staffers (so they’ll tell their bosses) and think tanks (so they’ll turn into policy statements that turn into laws)—the stories have to have heart, too. “You can’t predict,” he says. “But you can push.”

Because of a visa snafu, he had just 71 hours in Beijing, so his hosts careened him across town in a rush to compress, distill, purify an impression of the city—an experience echoed in one character’s mad dash across a Beijing gridlocked by a mass demonstration.

WELCOME TO THE PEAKS OF ETERNAL LIGHT

Two more interviews with KSR on Red Moon, this time audio and video:

You might have seen the excellent National Geographic series "MARS", which fuses fiction sequences with documentary interviews. It is essentially a Red Mars, however sans some more challenging themes (politics, ecology)... however that might be different in the series' new season, which first aired in November-December. Indeed, things on/in Mars get more political, and KSR is interviewed in its second season!

Finally, here is the recipe for a sake & vodka-based cocktail to go with your Red Moon!

And as always, to wrap up this update, here are some reviews of Red Moon - but careful of spoilers!

(Photo: the new Shenzhou Ferry Terminal at Shekou inaugurated in 2016, which might be familiar to readers...)