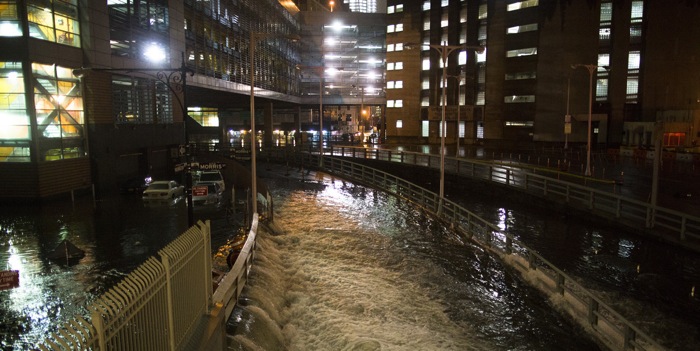 Pictured above: New York flooded by Hurricane Sandy, October 2012. These images should ring a bell in two different ways to KSR readers. First, there's the close-future Science In The Capital trilogy, wherein in Forty Signs Of Rain Washington DC is tragically flooded in the midst of undeniable climate change; an unhappy event like Hurricane Sandy. And then there's the far-future 2312, where climate change and rising sea level has made of New York City and Manhattan island in particular a Venice of the future, where tall buildings directly emerge from the water and the scenery is full of overhead bridges and piers; a description that is far away from the flooding as it was lived by today's New Yorkers, but a description of a city of which its inhabitants are very much proud of on 2312! Photo by John Minchillo.

In a short video interview for io9, Kim Stanley Robinson evoked the novel that got him into science fiction: Clifford D. Simak's The Goblin Reservation. It's relatively unknown, but it was a 1969 Hugo Award nominee; interestingly, John Brunner's Stand on Zanzibar won that year, and that novel had a much more obvious influence on Stan's 2312!

Stan was also interviewed by PrintAsia on 2312 and writing:

What is the basic difference between the Kim Stanley Robinson who compiled the Mars Trilogy and the KSR who wrote 2312?

Twenty years or so!  As a writer, I think that has made me less patient, and more interested in trying different structures and narrators.

Further on 2312: A stellar review by popular blogger and writer Cory Doctorow:

2312 is an epic story of political intrigue among the many worlds. To call it epic is to do it a disservice. It's the kind of book that makes you realize that the ambition of Red Mars was just a warm-up; that books like Years of Rice and Salt, which reimagined millennia of history, were just a kind of mental exercise for Kim Stanley Robinson. 2312 paints an absolutely credible and astonishingly beautiful picture of the centuries to come, of the sort of schism and war, the art and love, the industry and ethics that might emerge from humanity going to space without conquering it and without solving all its problems.

In lukewarm news, full videos of four panels from last year's Worldcon (Aussiecon 4) surfaced on YouTube! They are:

Starship Sofa's podcast #249 has a recording of Stan's short story "The Timpanist of the Berlin Philharmonic, 1942", narrated by Diane Severson. The story appeared in 2010's The Best Of Kim Stanley Robinson.

Finally, Kim Stanley Robinson will be appearing at the Humanity+ conference on "Writing the Future" in San Francisco, on December 1-2. He is scheduled at 10am on Saturday December 1. The subject of his talk?

Science as a Utopian Project

I want to explore the relationships between science, science fiction, and society, with a view toward seeing where science fiction might help us to shape our efforts in the present to make a better future.