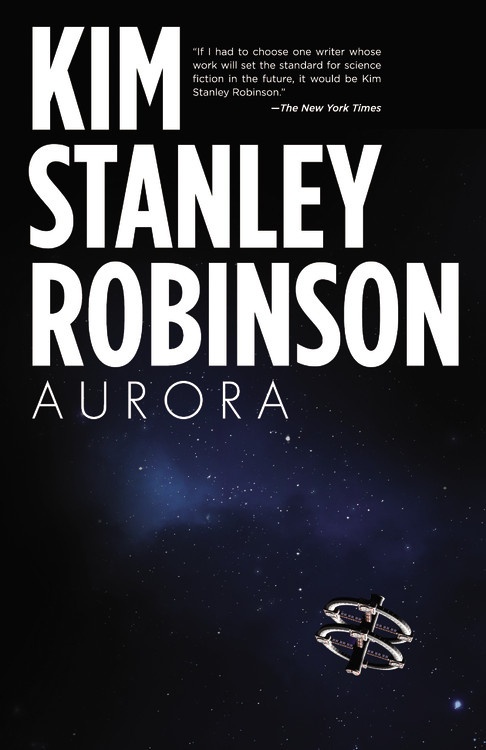 Aurora is the title of a Kim Stanley Robinson novel published in July 2015. It deals with the journey of an intergenerational interstellar spaceship with the mission to colonize Aurora, the moon of a planet in a star twelve light-years away from the solar system. As the novel begins, the ship has started decelerating to its destination, still eleven years away.

4. Reversion to the Mean

Confusion. Vote on what to do next. Violence. Ship intervenes. Reveal of the fate of the twin ship. Town meetings. Settling of Iris. Half the ship departs for Earth.

Survivors on Earth, shown around, confused. Landscape restoration on a beach.

Freya: a young girl at the start of the novel

Euan: an adventurous friend of Freya's

Jochi: a friend of Freya's strong in mathematics

Aram: a friend of Badim's, leader of the math group

Population at start of narrative: 2122.

In an interview with Romanian website SFMag in March 2014, Stan says:

In September 2013, in an interview at FDL Book Salon, Stan mentioned:

"My next novel is going to be about a multi-generational starship, actually.
But I don’t think they are going to work. I’m still working on that idea.
It’s part of the thinking going on in 2312 and Shaman, and so I think the three books will make a kind of argument for what we are and what we can or should try to become in the future.
This is something my editor, Tim Holman, has been pointing out to me; that these three books will make a kind of extended argument or case."

Also in September 2013, in an interview with Amazing Stories:

ASM: What projects are you working on now that we can look forward to?
KSR: Another science fiction novel, of course; this time, about a multi-generational starship to a nearby star.