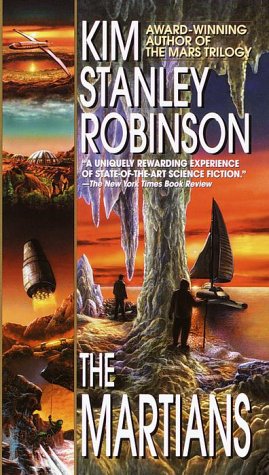 The Martians is a companion volume to the three volumes of the Mars trilogy, published in 1999. It is a short story collection, consisting of stories, poems, in-universe article excerpts, essays, and even meta/autobiographical stories ("Purple Mars"). Some of the stories were published before. Some stories do not take place in the same universe as the Mars trilogy; some others, while they share the same characters, are evidently alternate timelines to the trilogy.

It consists of the following stories:

Eileen Monday and Roger Clayborne continuity. First published in 1982. A group of hikers finds what look like fossilized sea shells in a Martian canyon.

The Way The Land Spoke To Us

Martian terrain and what it means for people traversing it.

Maya and Desmond's relationship throughout the years, as it was kept hidden from the Mars trilogy reader, as friends and occasional lovers.

Four tales of a hiker, musing on the significance of a trail, of reaching a trail's summit, of finding and losing a trail. Takes place in Crommelin Crater.

Not found in first editions; in all editions since the Bantam Spectra paperback edition of 2000. A NASA press conference on the finding of life on Mars by robotic probes.

A day in the life of the Coyote, where he sets up a visible banner protesting against the UNTA in a tented city.

Michel on Earth continuity. After a stay on Mars, which consists of scientific settlements with rosters instead of full colonies, Michel returns on Earth and rekindles his relationship with Maya.

Eileen Monday and Roger Clayborne continuity (possibly?). An American teaches a native Martian how to throw.

Martian folklore. The little red people and the water from terraforming.

The Constitution Of Mars

The text of the Martian constitution of the Second Martian Revolution.

Some Worknotes And Commentary On The Constitution, by Charlotte Dorsa Brevia

Some notes on the above by Charlotte.

Memories of Jackie on giving birth to and raising Zo.

While hiking, Nirgal comes across Edvard Perrin and George Berkovic in a Greek-style temple carved in the memory of Phyllis Boyle. They give a reading of past history presenting Phyllis as a force of "good", an alternate reading compared to the account the reader got in the trilogy. They hint at a possible reversal of terraforming in the future (a plot?).

The dam over Noctis Canyon encounters geological and weather difficulties.

Martian folklore. On Big Man, his amputated penis, John Boone and Zoya (a clone of Zo).

An Argument For The Deployment Of All Safe Terraforming Technologies

Surfing on Mars and dealing with global cooling that started in the 2210s decade.

Selected Abstracts From The Journal Of Areological Studies

A collection of abstracts dealing with the possible discovery of life on Mars. Sax Russell is among the authors.

Memories of living on the Martian Odessa.

A scientist observes similarities in human and dolphin DNA and observes how dolphins adapt to a changing environment; he draws parallels with his observations of women and his own relationship with his partner.

Enough Is As Good As A Feast

Idyllic life in a Martian agricultural commune inside a crater. Hints of a shift towards a cooler climate.

Coyote reminisces about his relationship with some key Mars trilogy characters.

A collection of little scenes from the point of view of Sax.

The Names Of The Canals

On the source of some place names in the Mars trilogy.

On the music listened to while writing the Mars trilogy.

Eileen Monday and Roger Clayborne continuity. An ice sailing trip. Mars is experiencing a global cooling and animal and plant life is going through a mass extinction; the older generation of Martians is living this as a tragedy, but for the new generation this is how Mars is supposed to be.

If Wang Wei Lived On Mars And Other Poems

A series of poems on life on Mars. Antarctica continuity (possibly?).

KSR's own account of his last day of writing the Mars trilogy!

Relation to the Mars trilogy and interconnections

The collection includes some stories that could be part of the main Mars trilogy continuity, or at least do not come in direct contradiction with it. These are stories that feature trilogy characters, like "Maya and Desmond" or "Jackie on Zo", or that are more abstract or completely lack any mention of characters or place in the future timeline, like "Four Teleological Trails".

The collection also includes some stories that are explicitly not part of the main Mars trilogy continuity. Some of them, interspersed across the collection, are interconnected: the collection results in a travelling between alternate timelines as the reader moves along. The main alternate continuities are:

Michel on Earth continuity. Consists of: "Michel in Anterctica"; "Michel in Provence".

Eileen Monday and Roger Clayborne continuity. Consists of: "Exploring Fossil Canyon"; "Green Mars"; "What Matters"; "A Martian Romance". "What Matters" blurs the lines with the main trilogy continuity by having the Claybornes from both continuities meet. "Arthur Sternbach Brings The Curveball To Mars" could arguably be set in this continuity, given that it includes a character first introduced in "Green Mars". In addition, there is mention of a global cooling on Mars as time passes, which also connects this with "Keeping The Flame", "An Argument For The Deployment Of All Safe Terraforming Technologies" and "Enough Is As Good As A Feast". "Keeping The Flame" would also blur the lines in terms of continuity, as it includes characters from the main trilogy, but who also happen to remember events differently from the main trilogy.