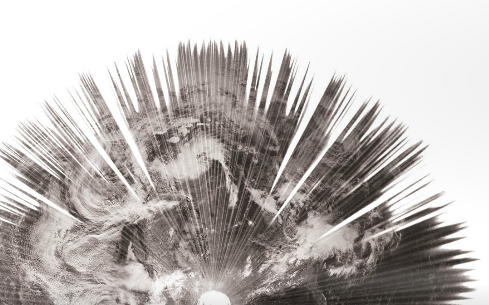 Developing themes touched upon in his Science In The Capital trilogy and 2312, Kim Stanley Robinson wrote an article for the onearth online magazine, "Earth: Under Repair Forever", dealing with...terraforming of Terra! i.e. geoengineering.

For the rest of history, we will be required to work at repairing the damage we've already done to the biosphere. Geoengineering, then, has become our ongoing responsibility to life on this planet, including all human generations to come. All of which leads to the question: can we actually design and accomplish any geoengineering projects that would mitigate or reverse climate change? Putting aside issues of political capability, are any of these projects physically possible?

Stan was even more strong on his choice of words when he visited the Mount Shasta Library recently. One of Stan's short stories is called "Muir on Shasta" (it appears in "Remaking History" and "The Best Of Kim Stanley Robinson"). He spoke on various subjects:

In response to a question on GMOs, Robinson said that an extended family member had developed a new strain of rice. “Global warming has meant the monsoons are much greater than before,” Robinson said. “The rice can survive under water for two months instead of two weeks. I think that’s good.” Robinson acknowledged that when scientists from the companies that produce foods with GMOs say it is safe, they are greeted with suspicion. “When you are mad at science, you are really mad at capitalism,” Robinson said. “The danger is when it becomes private for profit, like a Monsanto. The world should be a public utility. We should have public source genetic engineering.”

UK literary magazine Structo also featured Stan with an interview in its #8. Released in July 2012, it is now available online to read here. The interview, focusing on 2312 but not exclusively, is very enjoyable!

Stan was also extensively featured on literature journal Puerto del Sol, v.47 #2, an issue dedicated to "Utopias!" featuring original poetry and prose, reviews and a roundtable Q&A. The issue can be ordered from the magazine's website, however the KSR-related material is also available as pdfs:

If I understand the term, settler colonialism describes my own situation as a person of European ancestry living in California, and so I suppose it has an impact on me implicitly, as I, like so many others, have to consider what it means “to become native to this place,” as Wes Jackson named the project. In my case, the central valley of California is now my home. It’s important to remember how it was here before the Europeans arrived—”the Serengeti of North America” as it has been called—and what it is now, a space of industrial agriculture, with a manipulated water system and greatly altered ecosystems.

The hospitable world seems endless to our intuition—why else would so many dismiss climate change flatly?—yet our home is only a gossamer sheet on Earth’s surface, and even there only under specific conditions, and virtually the entire rest of the universe is unlivable without improbable technological feats. On a cosmic scale, our civilization is as fragile as the biofilm in a shower drain. Robinson manages, with Terminator, to convey awe at the fact that anything should exist in the first place, and the pleasure of exploration for its own sake.

In addition to his thorough stage setting, Robinson continues to celebrate—more than most sci-fi authors—the actual humanity of his characters.

One doesn’t have to work very hard to see the present in 2312, with half the world impoverished, the disparity between those with personal aircraft and those who dig their toilets unyielding, and so many denying we can ruin things for ourselves, even as libraries of evidence mount to the contrary.

Ultimately, 2312 is an update, a continuation, and a condensation of Robinson’s themes: the importance of sustainability and stewardship; the sheer difficulty of any space activity, an incredible challenge still not sufficient to dissuade human ingenuity; and the joy of mindful experience at all, of being a person who can feel, think, wonder, and love. Consider how often Robinson’s characters, almost all inhabitants of futuristic science fiction, adjourn for coffee and pastries, or head to cook, dine, and clean at a communal kitchen, or relax by hiking, examining flowers, spotting birds. Robinson centers aggressive, progressive sci-fi stories, covering incomprehensible distances, on humans doing human things. In this way, Robinson is among the most humane of writers.

Speaking of reviews, Bookbag on 2312.

The thoughts above on the fragile nature of our ecosystem and its small size compared to the enormity of the universe is referenced in an article in Nature as well, where Stan discusses the ever-growing list of exoplanets that have been discovered:

The stars exist beyond human time, beyond human reach. We live in the little pearl of warmth surrounding our star; outside it lies a vastness beyond comprehension. The solar system is our one and only home.”

(Pictured above: illustration for Structo #8)