After Galileo's Dream in 2009, Kim Stanley Robinson's next novel is 2312, which will present the world three centuries from now. Robinson's writings have often been concerned with imagining a future that is not as pessimistic as most futures commonly depicted in the media or our collective (un)conscious: a future that can become all the more possible because representations of a better world would form part of our mental relationship with what could possibly come tomorrow.

2312 was originally planned to be published in the beginning of 2012 -- fittingly enough, February 3 (2.3.12) for the USA and March 2 (2/3/12) for the UK were aimed! But eventually, the publication date was pushed back to May 2012: May 3 for the UK, May 22 for the USA and basically the world. It is Robinson's first novel with Orbit Books, and is being published in hardcover.

The year is 2312. Scientific and technological advances have opened gateways to an extraordinary future. Earth is no longer mankind's only home; new habitats have been created throughout the solar system, on moons, planets, and in between. Humanity itself, augmented and modified, has changed. But in this year, 2312, a sequence of events will force mankind to confront its past, its present, and its future.

The first event takes place on Mercury, on the city of Terminator, itself a miracle of engineering on an unprecedented scale. It is an unexpected death, but one that might have been foreseen. For Swan Er Hong, it is an event that will change her life. Swan was once a woman who designed worlds. Now she will be led into a plot to destroy them.

2312 is a bold and brilliant vision of mankind’s future and a compelling portrait of those individuals who will shape its events. It is a major new SF novel from one of the most important and gifted writers in the field.

'If I had to choose one writer whose work will set the standard for science fiction in the future, it would be Kim Stanley Robinson' New York Times

The NY Times quote is generic and is from Red Mars (I think).

The Fall 2011/Winter 2012 catalogue of Orbit Books included extensive coverage of that release: 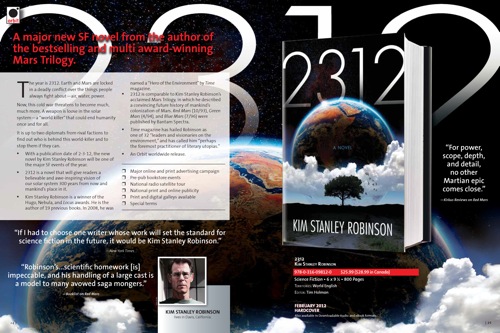 With the front and back cover dedicated to 2312, it looks like it is considered a flagship item in their catalogue! 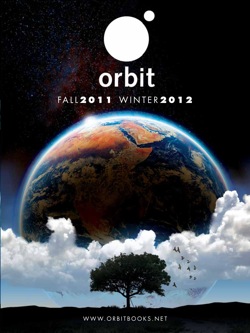 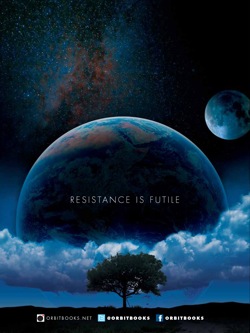 You can click for larger versions. I'm pretty sure the Borg are not featured in the novel.

Stan referred to 2312 in several recent interviews, most significantly in the Coode Street podcast which was released recently. After the down-to-earth Science in the Capital books, he seems to be eager to have some fun with science fiction concepts that he had not touched upon much previously. In Galileo's Dream, he touched upon extraterrestrial intelligence and time travel. In 2312, we can find some Robinson ideas explored in the latter parts of the Mars trilogy -- human expansion in the gas planets, terraforming of Venus, hollow asteroids, the Terminator city on Mercury -- but also some new territory: new technologies, groups of genetically modified humans, starships, artificial intelligence, the solar system as humanity's new playground... with the memory of a damaged ecosystem on Earth. 2312 sounds effervescent, all over the place, full of vitality!

Also, 2312 will be written with a similar structure to John Dos Passos' USA Trilogy (The 42nd Parallel, 1919, The Big Money, 1930-1936), which was adopted decades later by John Brunner in his landmark science fiction novel Stand on Zanzibar (1968): chapters focused on the 'main' characters alternating with newspaper clippings, radio show transcripts, fictional book excerpts, speeches, vignettes from other characters' lives... This 'collage technique' helps give a fuller view of the richness, complexity and contradictions of the world at hand. Robinson wrote an introduction to a recent edition of Stand on Zanzibar. In 2312, parts of these chapters will focus on narrating the history that has elapsed from our 2012 to 2312.

This is an exclusive excerpt of the book:

The sun is always just about to rise. Mercury rotates so slowly that you can walk fast enough over its rocky surface to stay ahead of the dawn; and so many people do. Many have made this a way of life. They walk roughly westward, staying always ahead of the stupendous day. Some of them hurry from location to location, pausing to look in cracks they earlier inoculated with bioleaching metallophytes, quickly scraping free any accumulated residues of gold or tungsten or uranium. But most of them are out there to catch glimpses of the sun.