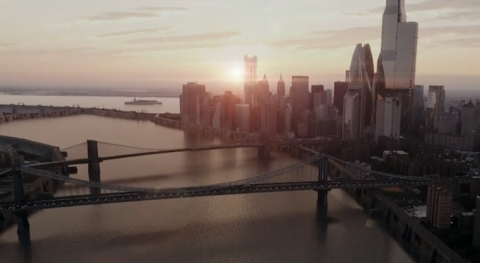 That is still a long way away... but to wait, we have the official synopsis:

A new vision of the future of New York City in the 22nd century, a flooded, but vibrant metropolis, from Kim Stanley Robinson, the New York Times bestselling author of science fiction masterworks such as the Mars trilogy, 2312, and Aurora.

But the residents adapted and it remained the bustling, vibrant metropolis it had always been. Though changed forever.

Every street became a canal. Every skyscraper an island.

Through the eyes of the varied inhabitants of one building, Kim Stanley Robinson shows us how one of our great cities will change with the rising tides.

And how we too will change.

A Venice-like future New York City, flooded because of climate change, was already featured in 2312. Here it becomes the setting of the entire novel, which will deal with the nuts and bolts of how to address and how to adapt to climate change -- technologically, financially, legally, socially -- as well as giving us a glimpse into what day to day life will feel like in that future society.

(Image: A future flooded NYC in Syfy's The Expanse)

can't wait to read it

Does this mean there will be a book tour?