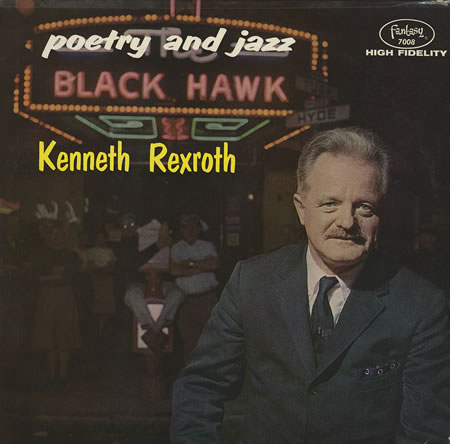 Kim Stanley Robinson's love for the Sierra Nevada is well known and permeates his work, as evidenced, among others, in the poems in The Martians or a trip to the Sierras in Sixty Days And Counting. He is now very excited to be editing the work of another lover of the Sierras, Kenneth Rexroth, one of Robinson's favourite poets.

Kenneth Rexroth (1905-1982) was an American poet whose biography is too rich and varied -- to a newcomer like me -- to be summarized in two-three lines for the purposes of this article. His poetry involved themes of love, sexuality, ecology, sociology, mysticism, he was involved in anarchism, communism, buddhism, taoism, dadaism, wobblies and all kinds of radical and free thinkers groups, he is considered as a founding figure of the San Francisco Renaissance of the 1950s, he influenced the Beat generation, he translated lots of poems into English and notably Japanese haikus, he mixed his poetry with jazz, he was a pacifist and conscientious objector of World War II, nearly published a guidebook for camping in the mountains... Lots of resources are available here, or even here and biographies here.

Rexroth's poetry was published by landmark poetry publishing house New Directions, founded by James Laughlin, with whom Rexroth camped and skied in the Sierras for many years.

Kim Stanley Robinson is now gathering all of Rexroth's Sierra-related poems, which were up to now scattered over dozens of publications over four decades of Rexroth's life. Robinson is providing an introduction and notes to this collection, "Rexroth in the Sierra", to be published by New Directions in fall 2011 or spring 2012.

(Photo: cover of Poetry and Jazz at the Blackhawk, a 1958 LP recording of Rexroth reading his poetry over jazz)

Here follows a Kenneth Rexroth poem on the Sierras and on Sacco and Vanzetti, two Italian immigrants and anarchists who were executed in Boston on August 23, 1927, accused of a murder they did not commit (taken from the Bureau of Public Secrets):

For a month now, wandering over the Sierras,
A poem had been gathering in my mind,
Details of significance and rhythm,
The way poems do, but still lacking a focus.
Last night I remembered the date and it all
Began to grow together and take on purpose.
We sat up late while Deneb moved over the zenith
And I told Marie all about Boston, how it looked
That last terrible week, how hundreds stood weeping
Impotent in the streets that last midnight.
I told her how those hours changed the lives of thousands,
How America was forever a different place
Afterwards for many.
In the morning
We swam in the cold transparent lake, the blue
Damsel flies on all the reeds like millions
Of narrow metallic flowers, and I thought
Of you behind the grille in Dedham, Vanzetti,
Saying, “Who would ever have thought we would make this history?”
Crossing the brilliant mile-square meadow
Illuminated with asters and cyclamen,
The pollen of the lodgepole pines drifting
With the shifting wind over it and the blue
And sulphur butterflies drifting with the wind,
I saw you in the sour prison light, saying,
“Goodbye comrade.”
In the basin under the crest
Where the pines end and the Sierra primrose begins,
A party of lawyers was shooting at a whiskey bottle.
The bottle stayed on its rock, nobody could hit it.
Looking back over the peaks and canyons from the last lake,
The pattern of human beings seemed simpler
Than the diagonals of water and stone.
Climbing the chute, up the melting snow and broken rock,
I remembered what you said about Sacco,
How it slipped your mind and you demanded it be read into the record.
Traversing below the ragged arête,
One cheek pressed against the rock
The wind slapping the other,
I saw you both marching in an army
You with the red and black flag, Sacco with the rattlesnake banner.
I kicked steps up the last snow bank and came
To the indescribably blue and fragrant
Polemonium and the dead sky and the sterile
Crystalline granite and final monolith of the summit.
These are the things that will last a long time, Vanzetti,
I am glad that once on your day I have stood among them.
Some day mountains will be named after you and Sacco.
They will be here and your name with them,
“When these days are but a dim remembering of the time
When man was wolf to man.”
I think men will be remembering you a long time
Standing on the mountains
Many men, a long time, comrade.