Kim Stanley Robinson, like last year, is participating in the Clarion Write-a-thon!

What is a write-a-thon, anyway? It’s just like a walk-a-thon. But instead of walking, we’re writing, and instead of making pledges per mile, we’re making pledges per word, chapter, or story. Writers get support, encouragement and motivation, and the option of joining a team with a writing mentor! Those who care about the writers in their life get a way to show their support. And money is raised for a literally fantastic cause — the Clarion Science Fiction & Fantasy Writers’ Workshop.

Pictured below: a Mars trilogy-inspired mosaic by the awesome Da Vinci Mars Design! A much higher resolution is available there. 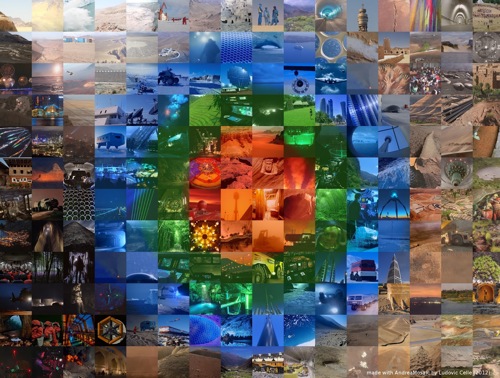 Another wave of 2312 material!

Once more, Kim Stanley Robinson was interviewed by Rick Kleffel of the Agony Column, at Stan's appearance at the Capitola Book Café on June 16 (direct mp3 link). Very entertaining and informative!

Stan was also interviewed by Wired's Geek Guide to the Galaxy (direct mp3 link). At their site you can also read a transcript of the whole thing. Lots of topics are touched upon: the Mondragon Accord, Jimmy Carter in Nepal, whistling Beethoven, the technological singularity, science fiction history, science fiction novels references in 2312, ...

Stan was also interviewed by Far Beyond Reality, in text form. A soundtrack for 2312?

All of these might work as a kind of soundtrack for a reading of 2312, as they often served as soundtrack for writing it.  In particular I guess I would recommend the fourth symphonies of Brahms and Tchaikovski, and the late string quartets of Beethoven, and Satyagraha.

One of the very best reviews I've read comes from Gerry Canavan, writing for the Los Angeles Review of Books:

The wonderfully inventive 2312 is, in this way, Robinson’s most aesthetically reverent work to date. Science, engineering, history, politics, philosophy, parenting, love — in this novel all are reimagined as essentially artistic practices, as the sorts of ecstatic creative pursuits people might devote themselves to once liberated from the drudgery capitalism inflicts on us. It might, therefore, be Robinson’s most nakedly utopian novel, his most ambitious attempt to show us just how good life after capitalism could be. Finally: a time for play.

But at the same time, 2312 could be Robinson’s least utopian novel — beginning, as it does, from the rejection of the “Mars Trilogy”’s happier historical trajectory in favor of a world(s)-system in which the ongoing historical struggle between the residual (feudalism), the dominant (capitalism), and the emergent (none dare call it communism) never crests, but just goes horribly on and on and on. Indeed, there is a suggestion late in the novel as pessimistic and unhappy as any I can recall Robinson making: that perhaps some people are just bad, that (worse still) perhaps true evil will only exist after scarcity.

An interesting though odd review comes from Strange Horizons; it's actually more of a critique of the pro-technology ideas underlying Robinson's approach to the future:

So much of Robinson's playfulness with the broad canvas of the solar system reminds me of a remark made by J. Robert Oppenheimer about the US building of the H-bomb—i.e., that it was "so technically sweet" that it could not be foresworn. So, as a political ecologist, I mourn for the domineering technological command over the planets and the moons envisaged by this fictionally realized blueprint of the cosmos. [...] Perhaps Robinson's book may yet inspire another SF writer to think beyond the technological sublime into other realms and other plausible futures more firmly grounded in the ecological imagination and our corporeal existence and recognize that in that imagined paradisal future, et in Arcadia ego.

Jeff VanderMeer for the Los Angeles Times ("Perhaps Robinson's finest novel, "2312" is a treasured gift to fans of passionate storytelling; readers will be with Swan and Wahram in the tunnel long after reaching the last page.") and Rick Kleffel are massively supportive of the novel

The Canberra Times/Sydney Morning Herald place 2312 in the context of the science fiction genre:

This particular vision of the future - an environmental catastrophe on Earth, followed by a rapid and transformative expansion into the solar system - is common to much contemporary science fiction. And while Robinson's version is perhaps less plausible (and certainly less densely imagined) than that explored in Paul McAuley's stunning The Quiet War series, or Alastair Reynolds's recent Blue Remembered Earth, it nonetheless presents a future that is in turn awe-inspiring, unsettling and challenging, not least in its preparedness to demand that the reader thinks seriously about the possibilities of using technology to make other planets habitable by humans. [...] These are not small criticisms, nor is it coincidental that they are criticisms that might also be made of sci-fi's golden-age writers such as Robert Heinlein and Isaac Asimov, both of whom shared Robinson's belief in the transformative nature of scientific rationality. Yet nor do they detract significantly from 2312's real achievements, in particular its power as a reminder not just of the possibilities of science, but of sci-fi's importance in opening our minds to those possibilities.

Also, reviews by The Speculative Scotsman, Adventures of a Bookonaut, The Star.