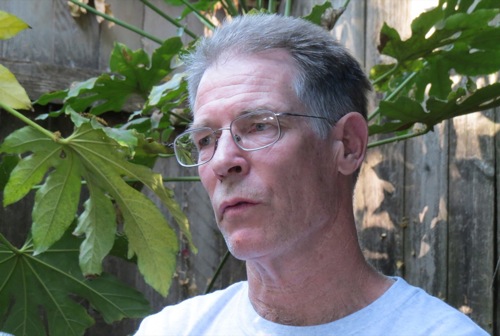 Boom - A Journal of California met Kim Stanley Robinson at his home and writing spot in Davis, California, for an extensive interview. His childhood, writing, science fiction, science, capitalism, utopia, his Three Californias trilogy, John Muir, and the history and landscape of California were addressed. Some excerpts:

Boom: Is there a special brand of California science fiction?

Robinson: I think so. It began with people like Jack London and Upton Sinclair, and then the Los Angeles Science Fiction Society in the 1940s. This included Ray Bradbury, who moved with his parents to Los Angeles when he was young, like I did, both of us from Waukegan, Illinois, but him maybe twenty years earlier. Bradbury was always focused on what modernization was doing to human beings, to the nontechnological aspects of humanity. There was also Robert Heinlein, who was living in Los Angeles in the forties. Crazy Bob they called him when he was young. He was always a strange amalgam. And then there was Philip K. Dick in northern California, also Poul Anderson and Jack Vance, Frank Herbert, and in her childhood, Ursula Le Guin. It turns out that many of the most interesting science fiction writers were in California. There’s something strange and powerful about California, as a landscape and an idea, so the place may have inspired the literature.

Robinson: Pacific Edge without a doubt. Pacific Edge was my first attempt to think about what would it be like if we reconfigured the landscape, the infrastructure, the social systems of California. I think eventually that’s where we’ll end up. It may be a five hundred year project. I thought of it as my utopian novel. But the famous problem of utopian novels as a genre is that they are cut off from history. They always somehow get a fresh start. I thought the interesting game to play would be to try to graft my utopia onto history and presume that we could trace the line from our current moment to the moment in the book. I don’t think I succeeded. I wish I had had the forethought to add about twenty pages of expository material on how they got to that society. Later I had a lot of dissatisfactions with Pacific Edge. You can’t have this gap in the history where the old man says, well, we did it, but never explains how. But every time I tried to think of the details it was like—well, Ernest Callenbach wrote Ecotopia, and then explained how they got to it in Ecotopia Emerging. And there’s not a single sentence in that prequel that you can believe. So, Pacific Edge was my attempt, a first attempt, and I think it’s still a nice vision of what Southern California could be. That coastal plain is so nice. From Santa Barbara to San Diego is the most gorgeous Mediterranean environment. And we’ve completely screwed it. To me now, it’s kind of a nightmare. When I go down there it creeps me out. I hope to spend more of my life in San Diego, which is one of my favorite places. But I’ll probably stick to west of the coast highway and stay on the beach as much as I can. I’ll deal, but we can do so much better.

Robinson: I am issuing a warning, yes. That’s one thing science fiction does. There are two sides of that coin, utopian and dystopian. The dystopian side is, if we continue, we will end up at this bad destination and we won’t like it. That’s worth doing sometimes. But I won’t do the apocalypse. That is not realist. It is more of a religious statement. I like disaster without apocalypse. Gold Coast is dystopian. And a lot of it has come true since it came out in 1988.

Boom: Do you think there is something special California can contribute to this utopian project?

Robinson: I do. I think we’re a working utopian project in progress, between the landscape and the fact that California has an international culture, with all our many languages. It’s got the UC system and the Cal State system, the whole master plan, all the colleges together, and Silicon Valley, and Hollywood. It’s some kind of miraculous conjunction. But conjunctions don’t last for long. And history may pass us by eventually, but for now it’s a miraculous conjunction of all of these forces. So I love California. Often when I go abroad and I’m asked where I’m from, I say California rather than America. California is an integral space that I admire. And we’re doing amazing things politically. I like the way the state is trending more left than the rest of America. And San Francisco is the great city of the world. I love San Francisco. I think of myself as living in its provinces—and provincials, of course, are often the ones who are proudest of the capital. And many of my San Francisco friends exhibit a civic pride that is intense, and I think justified. So there’s something going on here in California. I do think it’s somewhat accidental; so to an extent, it’s pride in an accident, or maybe you could say in a collective, in our particular history. So there’s no one thing or one person or group that can say, ah, we did it! It just kind of happened to us, in that several generations kept bashing away, and here we are. But when you have that feeling and it goes on, and continues to win elections and create environmental regulations, the clean air, the clean water, saving the Sierra, saving the coast: it’s all kind of beautiful. Maybe the state itself is doing it. Maybe this landscape itself is doing it.

Another utopia and climate change-focused article by Stan is up at IAI TV (a reprint from Australian magazine Arena).

The Australian Yahoo interviewed Stan on his most recent novel, Shaman, and the way he goes about writing. Some excerpts:

The final piece of Shaman fell into place when Robinson saw photos of 32,000-year-old cave paintings from France's Chauvet cave (discovered in 1995). "I was so struck by their beauty and age I felt I had my story, " he says. "I'd tell the story of the people who painted that cave." [...]

"I definitely enjoy my research, " he says. "It's reading with a purpose. I feel like I'm on the hunt, looking for good stories to tell, because I collect good stories from the research and retell them."

The process often begins years in advance as Robinson collects books and web links that seem relevant to an idea he's been "brooding on". When starting a book, he then looks for whatever he has on hand that's useful, but when he starts writing, the process changes to what he calls "iterative". "Once I've written a draft of a scene I know much better what I need to know to make it better, and that directs subsequent research."

And finally, you have one week left to submit a story to Stan! To The Best Of Our Knowledge, and partners University of Wisconsin’s Center for the Humanities and the Wisconsin Institute for Discovery, are running a competition for a 500-600 hard-SF story that would be turned into a radio play, the deadline is March 1!

We’re looking for great sci-fi stories, based on real science and set in the near future. Sci-fi master Kim Stanley Robinson, best known for The Mars Trilogy, will choose the winner.

The winning stories will be turned into radio plays, produced by To the Best of Our Knowledge and LA’s Ensemble Studio Theatre, directed by Gates McFadden (Dr. Beverly Crusher on Star Trek: The Next Generation).