Science fiction legend Ray Bradbury passed away recently, on June 5th 2012 at the respectable age of 91. Bradbury was of course the writer of one of the novels that defined the image of the planet Mars in the collective consciousness, The Martian Chronicles, a novel referenced in Stan’s Mars trilogy. 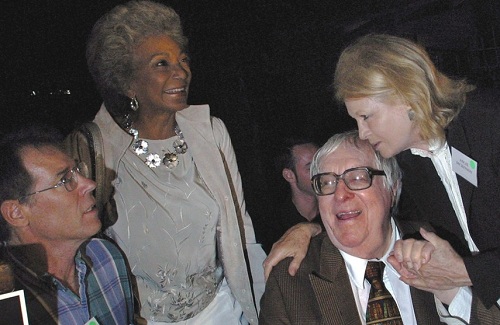 Of course, Kim Stanley Robinson and Ray Bradbury share the same home town: Waukegan, Illinois! Stan has also met and has spoken highly of Bradbury in the past. This photo (source) shows Robinson and Bradbury with actresses Nichelle Nichols and Angie Dickinson, at Bradbury’s 83rd anniversary in 2003. The celebration had been covered by Planetary Radio, and included appearances by Bradbury and Robinson.

Upon Bradbury’s passing, Stan had this to say to Wired:

Bradbury was one of the first break-out stars from the science fiction community into mainstream American culture, and this was no coincidence but because of his open and welcoming style, and the way his science fiction always focused on the human side of things, adding strong emotions to what had previously been perhaps drier or simpler. He was a great ambassador to the world for science fiction, and was beloved in the science fiction community as well. He was a truly inspirational figure to many, because of his positive nature and his boundless enthusiasm for reading, which he conveyed so well, and for life in general. His fiction always reminds us that no matter what strange future we move into, human emotions will stay central to our story. His best stories and books will be a permanent part of American literature. We were lucky to have him and I’m sorry he’s gone.

Stan also shared memories of Bradbury in this short audio interview for the Takeaway. (a shorter version aired next day).

Thanks to albinoflea for the reasearch!

The rockets came like drums, beating in the night. The rockets came like locusts, swarming and settling in blooms of rosy smoke. And from the rockets ran men with hammers in their hands to beat the strange world into a shape that was familiar to the eye, to bludgeon away all the strangeness, their mouths fringed with nails so they resembled steel-toothed carnivores, spitting them into their swift hands as they hammered up frame cottages and scuttled over roofs with shingles to blot out the eerie stars, and fit green shades to pull against the night.

(from "The Locusts", The Martian Chronicles) 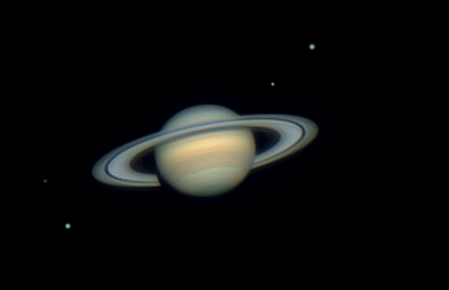 As always, check out the calendar on the left for KSR readings, panels, events, in the USA and in the UK.

Continuing with the interviews, the SF Site interviewed Robinson. Excerpt:

[I]t is an open question whether the space project could be a significant help to humanity in trying to get into balance with the biophysical realities on Earth. I don't think we know the answer to this question, and it won't be easy to answer it without continuing to try to go into space usefully, and see what happens. [...] But no matter what we do in space, Earth will remain at the center of the human story. That's one of the things 2312 tries to say. But mostly the book is asking questions. It's not really saying "this could be," but rather, "could this be?" I think it may be that human civilization is so big and various that different things might happen in different parts of it, and advances in some areas occur despite massive problems elsewhere. But this is mainly a question to be asked; is that possible? Could we bootstrap our way out of some of our problems while they are still vexing us?

I was forced to use the Kitchen Sink Theory of Novel Construction—again, of course—indeed, more than ever—but it was necessary, because the future is going to be a wild place, a recombinant multiplicity of clashing elements, a real mess. To do justice to realism these days, the kitchen sink is really nowhere near the end of what needs to get tossed into the mix.

Also, a great hour-long panel with Robinson from last November found its way on YouTube here. Stan discusses "Valuing the Earth and Future Generations: Imagining Post-Capitalism" at the Center for Values in University of Texas at Dallas.

2312 features, among many other systems, an economy that is aided by computers to tune demand with supply. It's interesting to read Stan write about Francis Spufford's recent SF novel Red Plenty, a novel that has had trouble getting categorized as fiction in bookstore (I personally encountered it in the 'History' shelves!).

According to Publishers Weekly, 2312 seems to be doing good at sales!

Reviews also have been pouring in!

2312 is as flat-out a celebration of the possibilities of SF as I’ve seen in years, not only in terms of classic space adventure [...], but in terms of gender evolution, quantum computing and artificial intelligence [...], and ecological catastrophe [...]. Robinson takes on so much information here, and so many techniques, that the novel sometimes seems on the verge of flying apart from its own imaginative momentum, but it’s something of a wonder to watch Robinson pull in all the kites in the end. Readers who want only the clean narrative arc of the planet-saving space opera that anchors the narrative might find a good two-thirds of the novel a distraction, but for the rest of us it’s a catalog of wonders.

Remember that U2 song “Tryin’ to Throw Your Arms around the World” from Achtung Baby? 2312 feels like Kim Stanley Robinson trying to throw his arms around the solar system, bringing the intimately personal sphere into the system-wide one, and vice versa. The result is easily one of the best science fiction novels of the year so far: a challenging, sprawling, multi-layered story that will provide food for thought long after you turn the final page.

Kim Stanley Robinson, whose new novel, 2312 , is his boldest trip into all of the marvelous SF genres—ethnography, future shock, screed against capitalism, road to earth—and all of the ways to thrill and be thrilled. It's a future history that's so secure and comprehensive that it reads as an account of the past—a trick of craft that belongs almost exclusively to the supreme SF task force of Le Guin and Margaret Atwood.

His new book 2312 is bursting with so many ideas and vivid characters that readers will be almost upset to hear it's a stand-alone. How could anyone create such a vivid, believable, mind-bursting future and not want to explore it further?

Finally, a funny bit of trivia: the Linux Mint 13 has been named "Maya", in part in reference to Maya Toitovna!

(Pictured above: Saturn and some of its moons, from APOD) 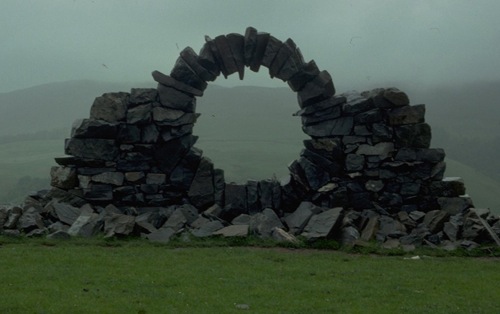 2312 is out, and of course Kim Stanley Robinson is out there to promote it (check calendar on the left).

Robinson was interviewed by Space.com: Part 1 (Terraforming the Solar System) and Part 2 (The Future in 2312). Terraforming, public vs private space exploration, Mondragon, genders and body modifications, it's all here.

[2312 is] far enough out that it gives you time to think about the differences between now and 1712, if you run it in the other direction.

Robinson also reacts in another Space.com article on space exploration and science fiction.

"Beyond the solar system' is too far away. [...] It's a joke and a waste of time to think about starships or inhabiting the galaxy. It's a systemic lie that science fiction tells the world that the galaxy is within our reach."

Head over to Wired.com and their podcast Storyboard for an hour-long interview with Robinson! Hear about 2312, time travel, Antarctica and the future of humanity in Storyboard 82 (direct mp3 download here).

Robinson was also interviewed by SciFiNow and provides many insights in the thinking that went behind 2312. Excerpts:

The idea that sparked it had to do with the central story, a romance between two people, one from Mercury, the other from Saturn (with matching personality traits). I needed a solar system-wide culture to make it possible for people to be living in those two places, and it grew from there.

What do you model your future society’s on in 2312? Is there a base coat that we can find on Earth today?

China, the West, the under-developed world, vampire capitalism, alternative economies like that in Mondragon, Spain, technological advances and environmental damage, the uneasy mix of hope and fear, utopia and catastrophe—all these are already here, and in the case of this book, being displayed as if from three hundred years further on.

And of course, the reviews are coming! Apart from a review in Locus Magazine, several have appeared online.

2312 is a thoughtful read, and I’m glad that I took my time while I read it. While slow and ponderous, I found myself struck by the concepts that Robinson was pushing forward, scientifically, and socially. This novel takes space opera and makes it truly epic in a way that I really haven’t read in a while, and imparts a sense of wonder in our surroundings that made this a very good read.

The real hero of "2312" is human enterprise. There are so many things we could do! Jog round Mercury like the rolling city, dawn always coming up behind you. Use orbiting mirrors to burn the canals back into the surface of Mars and make the Ray Bradbury images come true. Create giant artworks on the surface of Jovian moons. One thing we can't do, in Mr. Robinson's view, echoing Arthur Clarke's, is go star-traveling; even the nearest stars are out of our reach. The solar system is what we've got, and we need to do better with it than we have done with Earth.

(Pictured above: land art by Andy Goldsworthy, photo by the CASS Sculpture Foundation; Goldsworthy is an influence in the world of 2312)

Readers of Robinson’s other books also will recognize that the story in “2312″ is set several decades after the events in Robinson’s landmark Mars trilogy.

“There’s a line from Ursula Le Guin through me that extends to Paolo,” Robinson said, “a kind of green environmentalist strand of science fiction. It’s not a dominant strand in the field, but it is important.”

This is the first time the two have met.

On May 13, Robinson gave the Commencement Address for the UC Berkeley English Department. A short clip of this apparently very entertaining talk has surfaced on the internet here (despite poor audio quality).

Also, during his UK tour in June, Robinson will be appearing with fellow SF writer and friend Iain (M.) Banks (of the Culture books fame) in London.

Check out the calendar on the left for more 2312 promo events with Robinson! (USA and UK so far) 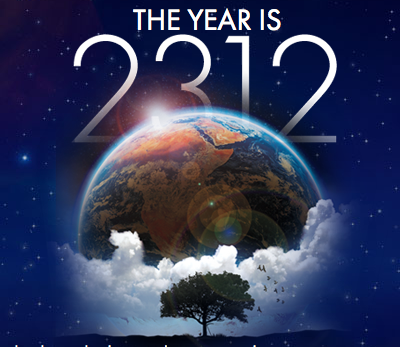 The "official site" for the book from Orbit is here. One of the chapters has been converted into a great little animation! Head over there to read and see the recipe on how to make a terrarium!

"The sun is always just about to rise."

The book counts 576 pages. It is split in many chapters of several types:

Many readers of the Mars trilogy will sometimes feel that 2312 takes the solar system of Blue Mars and runs wild with it!

The 2312 page on this site is here, where I will link to all reviews and related material as they appear. You can leave your own review in the comments there! The 2312 MangalaWiki page is here.

Stay tuned as the 2312 promo tour kicks in full gear!