On October 13, 2010, Kim Stanley Robinson, Terry Bisson and Gary Philips, three writers in PM Press's Outspoken Authors series (Robinson's The Lucky Strike), met up in a panel in CounterPULSE in San Francisco, and had a chat on politics in fiction:

It’s only a story; or is it? Fantasy, Science Fiction, and Noir conspire as three of PM Press’s Outspoken Authors series discuss the problems, pitfalls and possibilities of writing fiction from a revolutionary perspective. Kim Stanley Robinson is the Hugo-winning author of Red Mars and Galileo’s Dream. Terry Bisson is an award winning short story writer and the biographer of Mumia Abu Jamal and Nat Turner. And LA’s own Gary Phillips “combines politics and storytelling as well as any writer of crime fiction” (Ellery Queen Mystery Magazine). Co-Presented by PM Press.

KSR spoke on H G Wells, cyberpunk, science and utopia, Calvin and Hobbes and other topics. Terry Bisson moderated the panel, and the entire panel was uploaded on YouTube:

Continuing the series of articles on Kim Stanley Robinson's series of talks and panels in Australia last month, as more material surfaces in the new Big Brother entity that records everything called the Internet...

Rjurik Davidson, who interviewed Robinson a few years ago, wrote a new article for the Australian cultural magazine Overland, on Robinson's panel for the Melbourne Writers Festival on August 29th:

Robinson was a critic of cyberpunk. ‘I didn’t like It,’ he explained, because it was the literary equivalent of the neoliberal dogma that ‘There is No Alternative’. Cyberpunk sought to celebrate and revel in a free market future. For Robinson, optimism is not optional. We need an ‘optimism of the will’ he explains (paraphrasing Gramsci), because ‘to be pessimistic now is to let down our children and generations to come.’

In his latest novel, Galileo’s Dream, Robinson examines the relationship between science and capitalism and, as he explained, relied on Raymond Williams’ concept of a ‘structure of feeling’ to capturing a sense of sixteenth-century consciousness. In this novel, Robinson examines the nature of science as a project to liberate humanity. For him, the traditional left critique of science is a ‘category error.’

Monash University, which organized the conference on "Changing the Climate: Utopia, Dystopia and Catastrophe", August 30th to September 1st, has now posted online podcasts of its panels:

PhD student Zachary Kendal has written passionate reports on the three days of the conference:

A final Oz-related report should follow on KSRi, stay tuned... 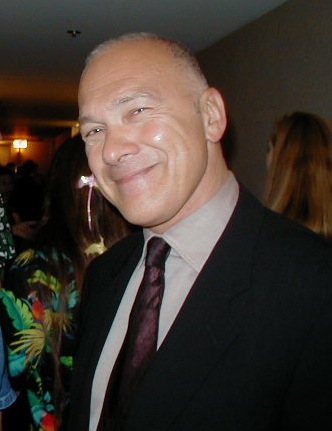 Raplh Vicinanza, literary agent based at New York with nearly four decades of work in his field, died suddenly at his home last Saturday the 25th of September of a brain aneurysm, at age 60. He has been the agent and a close friend of Kim Stanley Robinson for over two decades and played a significant role in launching his career -- Stan has praised him repeatedly. He represented other big names in science fiction and fantasy and worked in making US authors known overseas in particular.

Born August 8, 1950 and raised in the Bronx, Vincinanza graduated from DeWitt Clinton High School and later studied at Fordham University, graduating from City College of New York. He started out in publishing at the Scott Meredith Agency, working with authors including Norman Mailer, Carl Sagan, and Philip K. Dick, and quickly became known as “Mr. Foreign Rights” for his work in creating a global marketplace for American books. He opened the Ralph M. Vicinanza Ltd. agency in 1987, and was soon working with an ever-expanding roster of names: Stephen King, Robert Heinlein, Frank Herbert, George R.R. Martin, Terry Pratchett, Kim Stanley Robinson, Robert Silverberg, Connie Willis, Robin Hobb, to name a few. The agency grew in the 1990s, as longtime foreign rights associate Christopher Lotts began handling his own clients and Christopher Schelling joined as full agent.

Vicinanza was a much-loved and respected friend and colleague. He is survived by his mother Louise Manganiello, sister Louise Billie, partner Terrance Rooney, and many nieces, nephews, aunts, and uncles. A memorial service is planned for Friday, October 1.

Our sympathy and condolences go with his family, friends and coworkers. 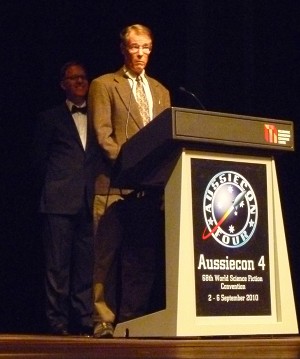 Aussiecon4 has ended, but articles, reviews and feedback is still coming in!

The Australian Literature Review is doing a whole series of articles dedicated to the event, and on Kim Stanley Robinson's panels specifically.

There's a report on Stan's Guest of Honour speech, for which there's additional reporting here.

"We're heading for a utopian future. And I say that because it's either utopia or a really severe catastrophe."

There's a report of Stan and Bob (that's Robert Silverberg) chatting on everything from New Wave SF, the process of writing (sitting or nude?) and archaeology to envrionmentalism, technology and the role of government. Additional reporting from Aussie blogs here.

Both started out writing on a typewriter and have known the frustration of typing and retyping pages because they couldn’t delete with their typewriter. Stan recalled about his first experience with a computer, “I remember pressing the backspace for the first time and the letter went away. I said, “I want one of these.””

Stan suggested that people’s lives in all societies are calibrated by the laws of that society and that governments have a role in continually re-calibrating those laws to meet the needs of people’s circumstances. However, Bob suggested that societies have worked best when people have freedom to pursue happiness. Stan suggested that governments have a role in distributing resources appropriately. Bob suggested that the appropriate role of government is to ensure people have the freedom to accumulate resources to direct as they choose toward the pursuit of happiness. It was refreshing to see this kind of conversation in Australia, in which two people with fundamentally different ideas on the most appropriate way for people to govern not only discussed it civilly but also discussed it in good humour as good friends.

Bob: “You’re something of an environmentalist.” (Eliciting a chuckle from the audience.)
Stan: “Except when I am flying to the other side of the world for parties.”

There's a report on the panel "Write What You Know!" with Jack Dann, Chris Lawson, Kim Stanley Robinson, Kaaron Warren, with advice for writers and the role of personal experience and research in a novel. Additional reporting and signing picture here!

Kim Stanley Robinson (K.S.R.) gave the following example: On a 2 month trip he spent in Antarctica, he stayed at a base where there were around 10 times more men than women, and the women had used the saying, “The odds are good but the goods are odd.” On that trip, he also observed how pine needles sank individually into the snow instead of a bunch of pine needles melting a patch of snow around the whole bunch. By getting some first-hand experience in an area you intend to write about in your fiction, you can pick up all sorts of details and this knowledge can add up and contribute to a much more realistic and detailed depiction.

Overall, the mantra ‘write what you know’ probably does more harm than good. Kim Stanley Robinson even went as far as stating that it came from people like Hemmingway and Kerouac who had no imagination therefore they felt they needed to have experienced everything themselves (his words, not mine). Everyone, barring aliens who read this blog, is human, everyone knows human emotions. A story, a book, a trilogy is made up primarily of human emotions. This is what we know, and this is the main area in which a writer can stuff up. The facts you can find out.

And there's another report on the panel "Destroying the future to save the planet: the environmental politics of SF/F" with the likes of Tom Moylan, Kim Stanley Robinson, John Clute, Glenda Larke, Jonathan Cowie (also check the comments on that link). From Lord Byron's Darkness and Mary Shelley's Frankenstein to John Brunner's Stand on Zanzibar Stan's own Science In The Capital trilogy, the relation of contemporary science with literature was discussed. Additional reporting here.

K.S.R. said he likes to look at the effects rather than the causes of the destruction in stories of this kind. He also said he prefers to provide practical and pragmatic portrayals of the effects of a situation – for example, if portraying a fictional situation in which use of resources is rationed out then also portraying the limitations on personal freedoms which go along with that.

John Clute describes climate change: “a global tragedy we don’t even seem to have the words to describe”

There's an exclusive interview with Stan, where he talks about his writing, his readings, his childhood and also teases his next novel:

I am about a third of the way through a novel, and will be writing it through the fall and winter, with the plan of finishing it in the spring. It’s a science fiction novel set in our solar system, all over our solar system, in the year 2312. By then people will be terraforming many planetary bodies, including Earth itself; but I hope to keep a realistic feel to the whole thing, to describe what we really could do, rather than shoot off into any kind of fantasy scenario. I’ll be pushing the boundaries of science fiction realism.

And there's more! Stan's talk on "Climate Change and Utopia" was captured on audio (direct mp3 link, courtesy of Gary Kemble) and, at least partly, on video:

The main question is: why would we want to go?

We could be doing it as an insurance policy. Kim Stanley Robinson said that this notion is both simplistic and naïve. Mars is not easy. Mars is cold and inhospitable. It is dusty. Dust gets into everything. It has less energy than Earth. While 15% less sunlight might not be detectable with the human eye, generating energy through solar power will require more effort. Terraforming is largely in the realm of Science Fiction, and the question is if we should attempt it in the first place. Is it ethical to modify an environment that may harbour information vital to understanding our origins?

Stan also presented this year's Hugo Award for Best Novel: a tie (!) between China Miéville's The City & the City and Paolo Bacigalupi's The Windup Girl. The Hugos have uploaded the whole ceremony on video (ack! the announcement of that award's win was not recorded!).

All in all it seemed it was great fun! And my thanks to Google alerts for helping me compile this post! 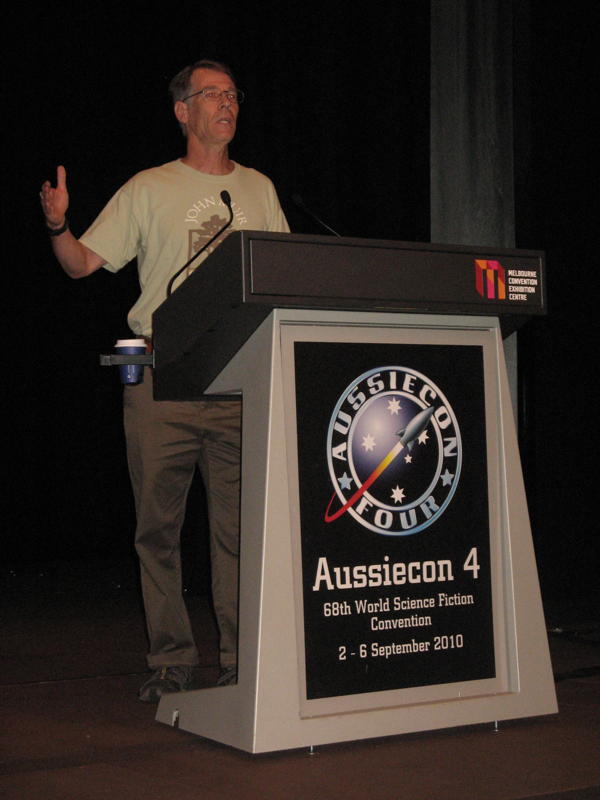 Kim Stanley Robinson delivered his Guest of Honour Speech at the WorldCon/AussieCon 4. Since interviewer Sean Williams was unable to make it, Stan conducted both the roles of interviewer and interviewee, jacket on/jacket off style!

An audio of the speech can already be found here (direct mp3 link), courtesy of writer and journalist Gary Kemble. Gary also wrote a piece on the speech for the Australian news service ABC News, which you can find here.

Stan took the opportunity to speak about the utopian process, and how important it is to believe, collectively, that a better future is possible, in order to achieve it.

"The more visions we have of a future where things are going right in some large sense, the more we believe in our hearts that we're headed that way as a consensus culture."

However, not much of utopia is found in fiction and literature, compared to dystopias that populate the SF genre (and in its filmic counterpart in particular!):

"The truth is it's really hard to write those kind of stories and we don't see enough of them," he said.

"Because of the utopian problem - the blueprint is boring whereas the disaster is more exciting. Making [sustainability] exciting is a double-bind, a particular problem that I wish more people would attack."

"Economics is the astrology of our time."

See previous post for the detailed program of events. Stay tuned for more.